Come From Away Tickets

The Hit Musical Based on the Remarkable True Story. Use our interactive seating charts to craft your perfect experience! Get tickets from the official ticket seller and enjoy your show worry-free! 100% Guaranteed Tickets For All Upcoming musicals at the Lowest Price. Don’t miss a chance to see a popular Broadway musical.

Come From Away made its Broadway debut at the Gerald Schoenfeld Theatre in March 2017 to rave reviews. It was workshopped and first produced at Sheridan College in Oakville, Ontario, before making its way through San Diego, Seattle, Washington DC, and Toronto before landing in New York City. The musical, with book, music, and lyrics by Irene Sankoff and David Hein, is set in the week following 9/11 and tells the true story of what happened when US airspace was closed thirty-eight planes had to land unexpectedly in Gander, a small town in Newfoundland and Labrador, Canada.

The musical is a story of human kindness, connection, and togetherness in the wake of a terrible disaster, and follows a number of characters who share their names with the real-life residents of Gander who housed and fed thousands of stranded travelers.

This show is perfect for anyone who likes down-to-earth and human stories in their musical theatre. Come From Away runs through the entire spectrum of emotions, featuring stories from different characters about loss, friendship, and both finding and losing love. The musical takes a look at the way we see the world and how that can be changed quickly, contrasting the horror of the 9/11 attacks with the goodness, generosity, and humanity that was shown by people in the aftermath.

The writers of the show, Sankoff and Hein, visited Gander in 2011 to interview both locals and returning passengers. Although they blended together with some stories, the entire musical is inspired by what people who were involved that day told them. There are stories about cultures clashing and people struggling to accept each other, but the musical demonstrates the way those relationships developed into trust, gratitude, and enduring friendships. The show won the Best Direction of a Musical Tony Award in 2017 along with three Drama Desk Awards including Outstanding Musical. 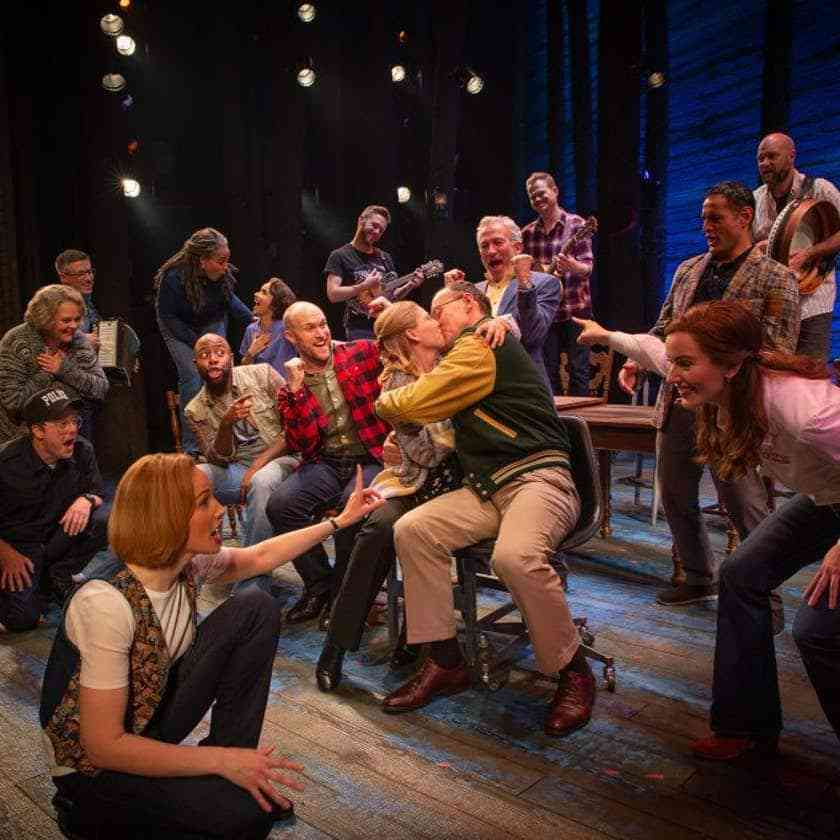 The Gerald Schoenfeld Theatre is located on West 45th Street in Manhattan and was built by the Shubert brothers in 1917-1918 before being named a New York landmark in 1987. The theatre has been home to a number of significant productions but Come From Away is certainly one of the most critically successful and beloved by audiences. The wooden set was created by Beowulf Boritt and is deceptively simple, featuring an onstage folk band, wooden furniture, and tall trees to evoke the spirit of Newfoundland. The stage was designed with a turntable, meaning that it’s adaptable and can be easily changed between scenes. A rustic, warm atmosphere is conveyed to audiences through Boritt’s use of materials and colors inspired by the natural world.

The story begins on the morning of September 11th, 2011, when the audience learns what life is like in Gander before the characters find out about the terrorist attacks that took place in New York, Washington DC, and Pennsylvania. Because US airspace has been closed, 38 planes have been diverted and land at Gander airport, adding almost 7000 passengers to their small town. The musical follows the stories of pilots, flight attendants, passengers, and the residents of Gander as they deal with what is happening to them and what may have happened to their loved ones as they form new relationships with each other.

There is no better show to see if you want to feel a little extra confidence in the goodness of the world around you. Come From Away is not a high-stakes show as the atrocity takes place offstage and the audience sees only the aftermath: the grief, the shock, and the way that people rally together after a painful disaster in an effort to create something good from something terrible. Highlights include Me and the Sky, sung by pilot Beverley Bass, an empowering song that sees Bass detailing the sexism she has defeated thus far in her career, and the opening number Welcome To The Rock, but audience members will find themselves overjoyed by the warmth and love evident throughout the entirety of this show.